Trip to Scotland – Glencoe and Highlands 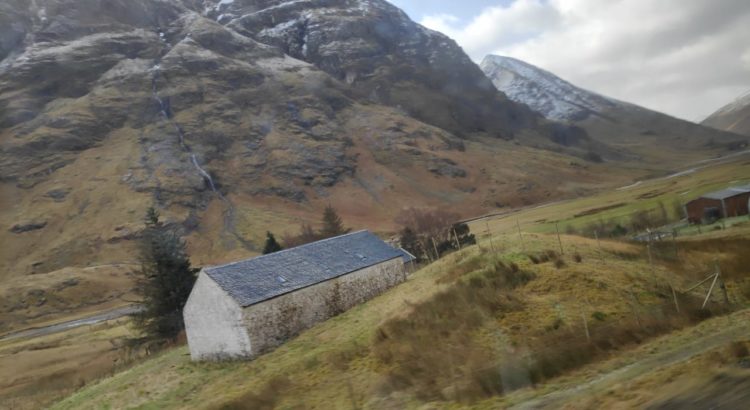 Scotland is known for its highlands which abound in natural beauty. But if you visit during the winters, you see a different side. I was against strong winds, rain and snow but I still went on the highland tour to see different places. It was in Feb 2020 when I was there for an official visit from India. On a weekends, I went for a guided tour during my trip to Scotland. The first stop on the tour was Loch Lubnaig. The minute we reached there it started snowing. The lake was flooded and had reached the parking area, but it was beautiful nonetheless. It is a freshwater lake near the town of Callandar. In the summers, one can rent canoes and go out on the loch.

Next up was the Rannoch Moor, a boggy moor from where you can view the Ben Nevis. In the winter it is covered in snow and makes for a mesmerising view. It is popular as the series Outlander was shot here. There are cycling routes here which can be used in the summer. Glen Coe is a glen of volcanic origins and is owned by the Scottish Natural Heritage. The journey through the glen is quite stunning. It is popular with climber and hillwalkers. The Massacre of Glen Coe took place here when 38 people from the Clan of MacDonald were killed by government forces as they allegedly hadn’t pledged alliance quickly enough to the monarchs. There is appoint on the highway from where you can see the three sisters (mountains) – Faith, Hope and Charity. Although in the cold the wind is whipping around you, the view is pretty. The next place we saw on the road trip was the Great Glen and the Great Glen fault. All of these are on the A82. There are multiple rivers on the way, and they were swollen with overflowing water. When you are on the road you can clearly know when you cross the fault line. There is a sudden dip on the road, and you know you have crossed the Glen Fault.

We go along the route and see eth Caledonian canal to reach Fort Augustus. This is a small town with roughly 600 inhabitants. It is at a good height, so it was snowing throughout. There are public toilets here where you need to pay 50 pence to get in. I ate at a small café right behind Bothy’s and I cannot recall its name. The chilli with rice and salad was quite good and a great portion for me. The Loch Nessie gift shop next door is what I loved most. There were toiletries from Arran (which I love) and I splurged. The weather was not too good so I was advised to not go on the boat as the waves would be high. Knowing I would be seasick, I conveniently avoided that. Even I did not wanted to get sick during my trip to Scotland but instead enjoy it. We drove through the Grampian Mountains and Highland Perthshire for great views. There was a highway that goes near the Cairn Gorms which was covered in snow. The whole place looked like a winter wonderland. We also saw dear close to the road and it said that in winter they come down to lick the salt on the roads. We stopped in local cafes and shops that sold interesting pieces that could be picked for souvenirs. Most Scottish souvenir shops are overpriced but you can find good deals in many of them. The winter had overflooded rivers as there is no dearth of water in Scotland. This trip to Scotland and a tour was long, but I got to see the natural side of the Highlands. Although I am a history buff and would prefer monuments, this trip was quite memorable.