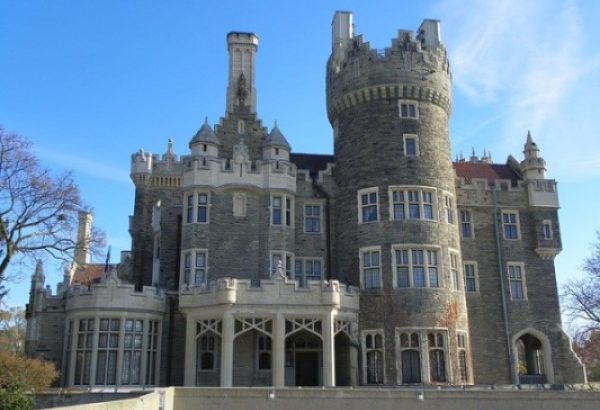 Ontario is a place of history, of stories and it is filled with places that sing of its rich history. These are the places you must visit when you are in Ontario to know the heart and soul of the place. We have made a list of the top 10 historical places in Ontario that you can and should visit.

Casa Loma represents the only castle the city has. It was constructed in the initial years of the 20th century in the style of the Gothic Revival. It is situated in the middle of the town and this landmark was once the formal house Henry Mill Pellatt, a financier who helped in bringing hydroelectric power to Toronto. With 98 magnificent rooms, it was the largest private home in Canada. Today, it is a museum that is often used for weddings and movie shootings. You can get guided themed tours or decide to have a digital audio guide to explore the castle on your own.

The distillery district was once the biggest producer of spirits for the British Empire. Today, it is the top tourist hub for Toronto and is packed with many shops and bars. These shops and bars are situated inside the well-preserved buildings from the Victorian-era. In this quarter of ten streets, there are many old warehouses that are now converted into upscale boutiques, artist workshops, trendy eateries, and modern art galleries. Newlyweds love to get their picture clicked iconic redbrick buildings of the area. You can find the upcoming events in the area on its website and plan accordingly.

Notre Dame Basilica is the oldest and largest church in the capital city of Canada and one of the top historical places in Ontario. It has extremely intricate designs. When you casually glance at the exterior, it might seem ordinary to you but as you enter the church, the breathtaking royal gold and blue features, a high altar, the grand vaulted roof, a pipe organ with more than 1,000 pipes, and stained glass window will awe-inspire you.

White Water Walk is the widest stretch of white water in the world and on of the best travel places in Ontario. Here you can amaze yourself at the trillions of gallons of water roaring with power. You will travel 229 ft. down in an elevator to reach a short tunnel. This tunnel will lead you to the edge of the water. Then you will have to take a 305 m Broadwalk that is just at the distance of your arm from the natural phenomenon. This Broadwalk will take you to the two observation points from where you can view the ferociously raging Class 6 whirlpool rapids at 48 km/h. From this point, you will be able to see how the rock layers of Niagara Gorge that are 420-years old were slowly forged with the sheer force of the water.

Upper Canada Village transports you to a bygone era. It is a heritage park and museum that is modeled after a 19th-century village. It features more than 40 historical buildings like farmhouses, working mills, trade buildings, etc. that are open for the public to look around and see the locals working and playing. You will also get to see the demonstrations of various commercial and agricultural processes involving smiting, farming, and cooking. You will also get to know a few aspects of contemporary culture.

Fort Henry National Historic Site was built in 1812 for protecting the naval dockyard of Kingston from American Interference. In 2007, it became the part of Rideau Canal’s UNESCO world heritage site. Visitors can see the drills that uniformed Fort Henry Guard will reenact. You can enjoy the artillery shows and can take the guided tours around the fort. It will enlighten you about its military and possibly haunted past.

This 19th-century castle was a former residence that is now a museum. Dundurn Castle is an impressive neoclassical mansion was completed in 1835 and it has been restored to its original look of 1855. It was the time when Sir Allan Napier Macnab, a Canadian politician and 1st Baronet lived here. Someone in the costume of that period will give you a guided tour of the castle.

Peterborough Lift Lock is a marvel of physics and technology of the 20th century. It is the world’s highest hydraulic lift lock at a height of 65 ft. which is approximately 60ft higher than the other conventional locks of that time. It works only on gravity and its one caisson works as a counterweight for the other.

You can visit Canada’s first railway tunnel anytime between April and October. It was completed in 1860 for the Ottawa and Brockville Railway. Then it was owned by the Canadian Pacific Railway and in 1983, it was acquired by the City of Brockville. It is a remarkable example of the pre-Confederation industrial heritage of Canada.

St James Anglican Cathedral is both a Cathedral church of the Anglican Diocese of Toronto and a parish church for the historic St. Lawrence neighborhood. The church is of the oldest congregation, the parish was established in 1797 and is one of the best historical places in Ontario.

So, relive the history of Ontario with these 10 sites.